Hospitality Case Study: From Banker to Host to Hotel Owner 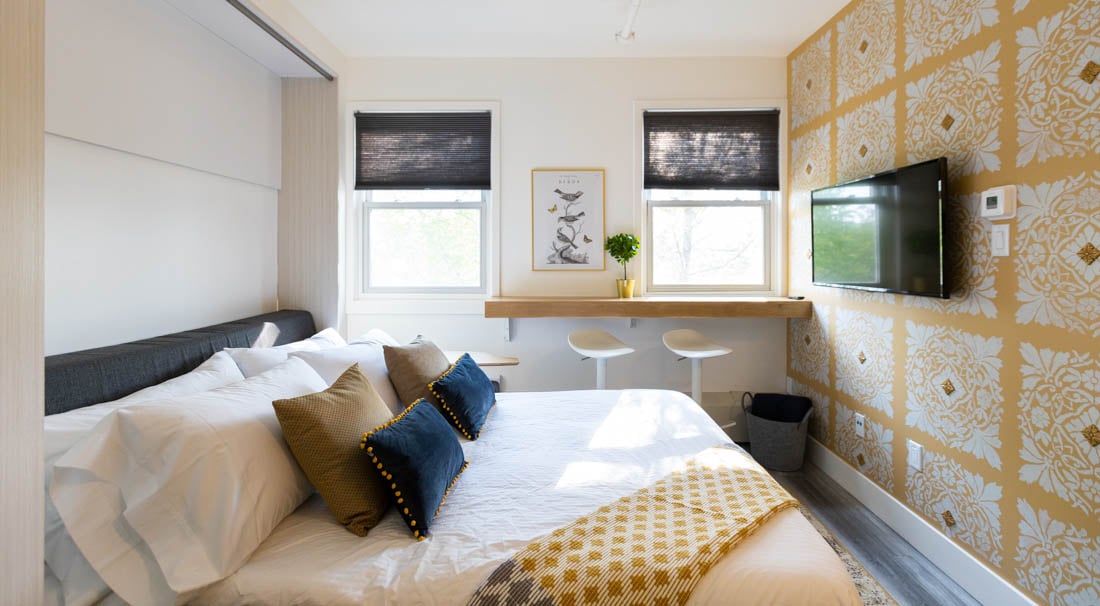 Canadian host Tommy Kalita is a hotel industry inspiration. In just five years, and with zero prior experience, he’s successfully transitioned careers from finance to hospitality, scaling all the while.

From starting out in his basement, he now runs eight B&B suites in Edmonton, Alberta, and is poised to add 60 more with his new hotel project. Impressive enough at a time when other hospitality companies are struggling, but here’s the best part: Tommy runs his hotel operations single-handed!

His secret? An eye for the authentic and staying on top of hospitality industry trends to create a unique guest experience.

Here’s how he does it.

Tommy first dipped a toe into the hospitality industry when he rented out the basement suite in his Edmonton home on Airbnb. It went well and he soon added another room to his offering.

In 2019, he took over the running of the eight-room Corduroy Suites on the top floor of the historic Gibbard Block building in the Highlands neighborhood. The Gibbard was previously home to the La Boheme B&B before it closed in 2018 and restoration work began on the building.

Though not a major tourist destination, Edmonton has a lot going for it, including proximity to some beautiful mountains. As a lifelong local, Tommy wanted to take a different approach to other hotels, which he feels don’t speak to the local community or do enough to showcase the city. He also wanted to avoid the cookie-cutter conformity of big hotel chains so he set out to create a unique space that tells the history of the Gibbard building, the Highlands, and Edmonton itself.

Respecting the Gibbard’s 100-year history was paramount, so Tommy consulted the Highlands Historical Society and partnered with a local design company. With sustainability and individuality in mind, they strove to retain or upcycle many original features. Today, each of the Corduroy’s individual rooms has a chic, Scandinavian feel but features local or historical artifacts for authentic detail.

Original claw foot bathtubs still dominate the bathrooms, while guests rest their coffee cups on tables repurposed from old radiators and 150-year-old grain elevator beams. The vintage paneled doors that had to be changed to bring the building up to code got a new lease of life as wainscotting. Even the wallpaper is inspired by conversations with the Historical Society.

And the local angle doesn’t end there: the best of modern-day Edmonton is also represented by local products in all rooms. Guests can shower with locally made Rocky Mountain Soap before turning in on mattresses supplied by Healthy Bedroom. Spices and coffee also come from Edmonton companies Silk Road and Transcend Coffee. 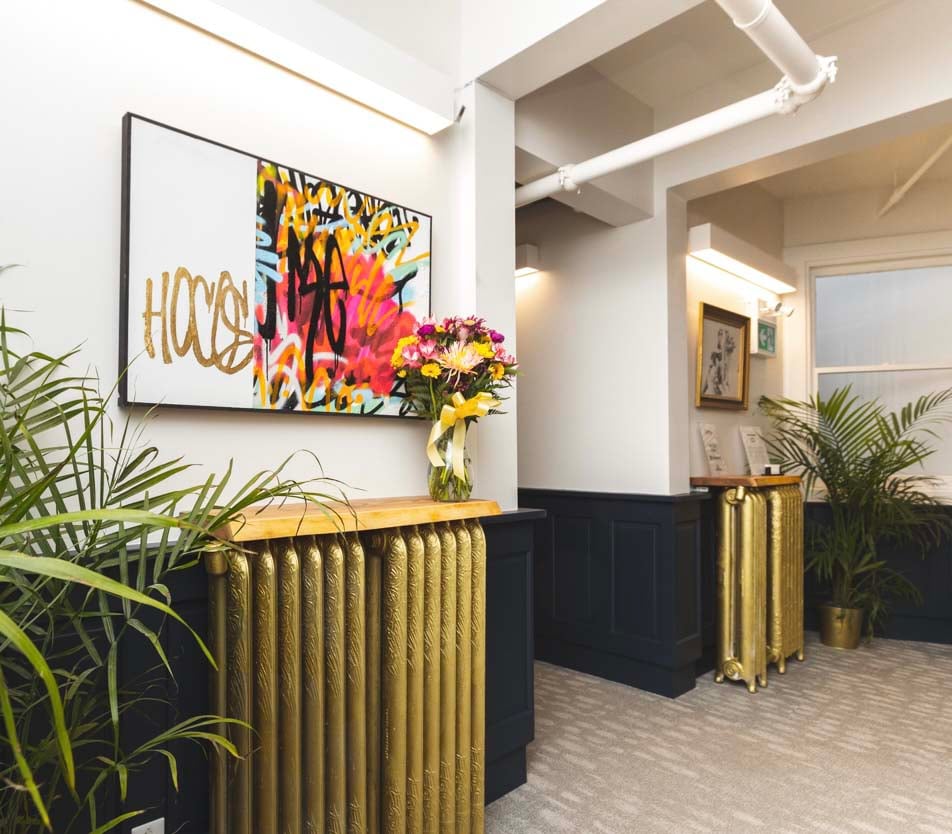 Despite the focus on conservation, however, the Corduroy was never intended to be a museum piece. Tommy wanted to combine the best of tradition and modernity for an excellent guest experience and he was quick to ditch outdated hotel management procedures that didn’t fit that vision. Knowing a tech-first approach would allow him to streamline operations and keep costs low without compromising on quality, he brought Operto on board to automate and optimize his systems.

Corduroy guests enjoy secure, contactless check-in with Operto Connect’sTM unique access codes and have a 24-hour digital concierge on hand, which means Tommy can save on reception staffing costs.

Via the Manager Portal, he has a 24/7 360o view of what’s going on in his property and can also streamline housekeeping. He also has the option to monitor noise and energy use, should he choose, or allow guests to communicate through the Guest Portal and manage and personalize in-room smart devices, heating, and A/C.

All of which comes in handy when you’re a one-man management team with only one service team on contract.

Partnering with a digital-first provider to enable one-person ops

Time was, even a modestly sized B&B like the Corduroy would require a multi-team operation. Now, though, Tommy manages it all with just the cleaning team and virtual receptionists on staff. Handymen and security are on call in case he needs them. Automating face-to-face procedures via tech solutions has allowed him to run a lean operation and impacted positively on profitability.

He’s now two years into his relationship with Operto and is happy he took the leap. “It’s been a good fit,” he says, “makes my life a lot easier.” Among other benefits, he appreciates the watertight security of unique access codes and not having to deal with lockboxes and physical keys. “I’m blown away a lot of times by, on the Airbnb scene anyway, how often people don’t take security seriously,” he marvels.

It nearly didn’t work out this way, however. When he opened the Corduroy, Tommy was poised to go with another company but just wasn’t getting the right vibe. A call with Operto convinced him to give it a try instead and he’s never looked back. He signed up for the tech, but it’s the human side that got him hooked.

Running the Corduroy solo means Tommy needs to be able to rely on a team that understands his business and responds to his needs, whatever, whenever. And even during the steep learning curve of their early days, he explains, Operto repaid his trust by always being on hand to quickly deal with any issues and keep everything running smoothly.

“I’m very much a relationship person,” he says, “I would rather know that the people I’m working with are going to do the right thing.” A sharp businessman and a people person, Tommy appreciates the human resources savings of automation and keyless entry for rental properties but is very aware that people are key to running a hotel, especially when they’re absent from customer-facing positions.

He liked it so much he bought a hotel!

Flush from his success with the Corduroy Suites, Tommy is now on the verge of becoming a fully-fledged hotel owner with the launch of a new high-end venture in January 2022.

The new 60-room hotel is a much bigger investment than the B&B but he’s sticking with his winning formula. The new space will continue what the Corduroy started by partnering with local artists and makers to feature custom-made furniture and fittings throughout, much of it available to buy through the hotel.

The same core tech, systems, and teams will also provide an unforgettable guest experience, although with an on-site restaurant and liquor store in the works the team will be expanding to include food service and sales.

And as if all that wasn’t enough, Tommy is currently in discussions with the developer he partners with to work out a management deal for yet another hotel, which may be opening even sooner. With everything he’s got going on, you’d think he might be a little overwhelmed, but he’s having a blast in his new role and enjoys combining all his interests in one place: design, systems, and customer service. And, of course, the chance to show off his hometown. Hospitality case studies don’t get much more inspiring.

Tommy Kalita’s story proves you don’t need years of experience to become a local hotel industry leader. All you need to do is create from the heart, put the guest experience first, and have the courage to try out new ways of doing things.

In a short space of time, he’s created a one-man property management company with operational excellence and a differentiated offering that’s a hit with his guests. With lean times still ahead thanks to the Covid-19 pandemic, it’s hotels like Tommy’s that are able to leverage smart solutions and cater to today’s tech-savvy travelers that will stand out and survive. 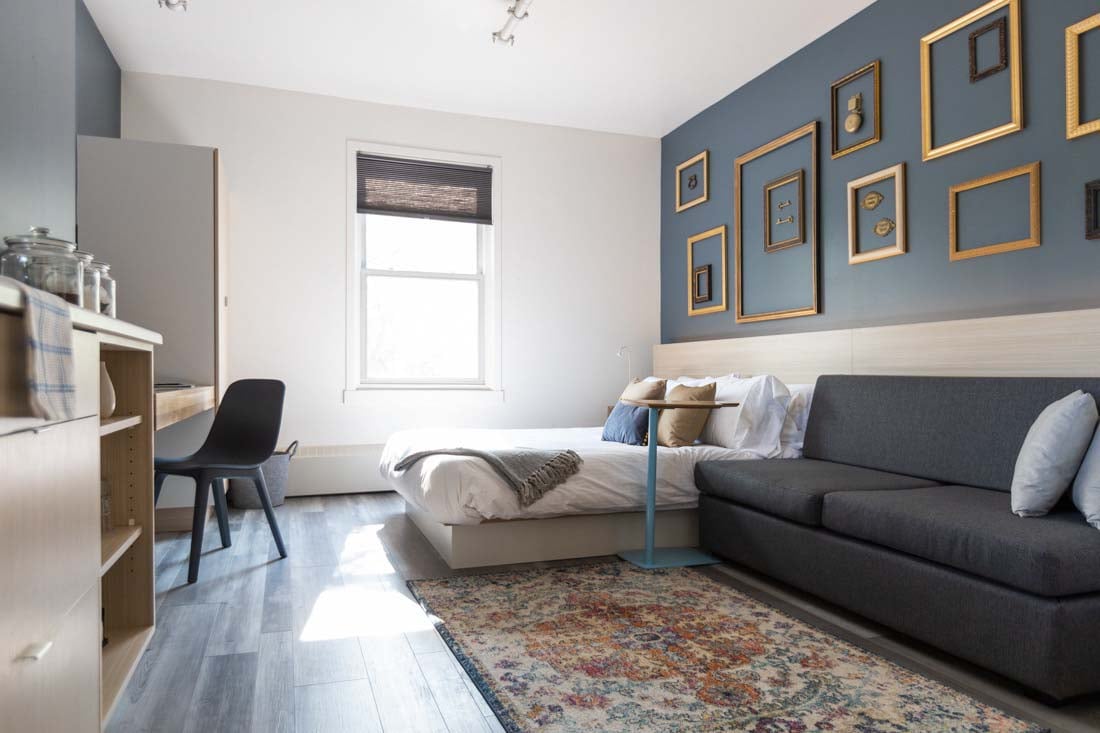 We use cookies to personalize content, to provide social media features and to analyse our traffic. We also share information about your use of our site with our social media, advertising and analytics partners who may combine it with other information that you’ve provided to them or that they’re collected from your use of their services. You consent to our cookies if you continue to use this website.

This website uses cookies to improve your experience while you navigate through the website. Out of these, the cookies that are categorized as necessary are stored on your browser as they are essential for the working of basic functionalities of the website. We also use third-party cookies that help us analyze and understand how you use this website. These cookies will be stored in your browser only with your consent. You also have the option to opt-out of these cookies. But opting out of some of these cookies may affect your browsing experience.
Necessary Always Enabled
Necessary cookies are absolutely essential for the website to function properly. These cookies ensure basic functionalities and security features of the website, anonymously.
Functional
Functional cookies help to perform certain functionalities like sharing the content of the website on social media platforms, collect feedbacks, and other third-party features.
Performance
Performance cookies are used to understand and analyze the key performance indexes of the website which helps in delivering a better user experience for the visitors.
Analytics
Analytical cookies are used to understand how visitors interact with the website. These cookies help provide information on metrics the number of visitors, bounce rate, traffic source, etc.
Advertisement
Advertisement cookies are used to provide visitors with relevant ads and marketing campaigns. These cookies track visitors across websites and collect information to provide customized ads.
Others
Other uncategorized cookies are those that are being analyzed and have not been classified into a category as yet.
Statistic Cookies
Statistic cookies help website owners to understand how visitors interact with websites by collecting and reporting information anonymously.
Preference Cookies
Preference cookies enable a website to remember information that changes the way the website behaves or looks, like your preferred language or the region that you are in.
Marketing Cookies
Marketing cookies are used to track visitors across websites. The intention is to display ads that are relevant and engaging for the individual user and thereby more valuable for publishers and third party advertisers.
Save & Accept